Want to get lowdown on everything emoji? Well, the good people at NeoMam Studios have created a wonderful info-graph and guide on everything emoji. From the history to the stats, they’ve got it covered. We’ve gone ahead an transcribed everything you need to know below. You can also find the beautiful visual graph at the bottom.

A picture is worth a thousand words – maybe that’s why emojis are the go-to way to communicate when we’re messaging each other.

But what exactly are they, where did they come from and why do people love them?

A History of Emoji

We remember more of what we see than what we hear. So it’s no wonder these little ‘picture characters’ have taken off.

Emojis help us communicate emotion and tone – something difficult to convey in text. But the appeal of emojis could also be in their indefinite meanings. You can say something without explicitly saying it. It’s like body language for text messaging.

The ability to visually read a situation at a glance deteriorates the older we get. Perhaps that’s why emojis are more popular with young people. 50% of 18-29-year-olds have used emojis.

Nevertheless, 55% of people say the main reason they use emojis is because they’re cute.

Emojis: are we devaluing the way we communicate, or expanding it with creativity? What do you think? 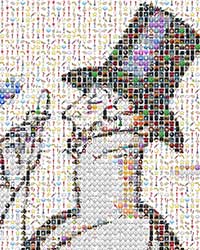